OMG! We Met Teenape at the Ikea Store of all Places! 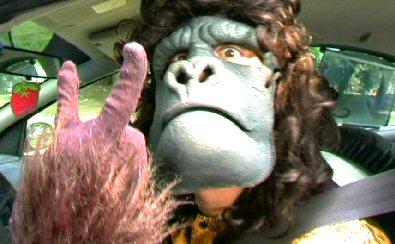 It's no secret that I am a huge horror fan. However, my wife isn't. She enjoyed the classics (Dracula, Frankenstein, Creature from the Black Lagoon), but I'll never get her to sit through all (or any) of the Friday the 13th films and the mere mention of a Rob Zombie movie sends chills up her spine. Her distaste for horror is the reason that I find it very odd that she LOVES everything that Low Budget Pictures has released. I consider LBP flicks more comedy than horror, but they get quite graphic (in more ways than you can imagine).

Our first encounter with a "Low Budget Pictures" flick (or "A Chris Seaver Rape") was Taintlight. Not long after it was on Netflix, we watched it and laughed for days. We ended up watching it MANY more times (and will watch it many more I'm sure... in fact, mentioning it here has just made me want to go watch it again once I post this). Since we loved Taintlight so much, we decided to find out what else the Low Budget Pictures gang had done.

The next LBP movie that we found was the only other one that was available on Netflix… "Teenape Goes to Camp". It quickly became obvious that the characters in "Teenape Goes to Camp" had history that could have only been explained in earlier LBP movies, but we watched it anyway. We've since seen just about everything LBP has done. If you've seen enough LBP flicks, you'll understand why Teenape (played by Casey Bowker) is our favorite character. Teenape, by far, is the most quoted movie character in our house; "Yo ho ho bitch" never gets old!

Casey Bowker (Teenape) and the rest of the LBP gang are all from New York, that is why we about crapped our pants when we saw him sitting across from us at the Ikea store cafeteria in Charlotte, NC! What?! We couldn't stand it so I obviously had to go over and ask him if he was Casey Bowker (aka, Teenape). I think he was as surprised to get noticed in the Ikea store 100s of miles away from home as we were to notice him there. He was a super nice guy and we talked very briefly. We wanted a picture so bad but didn't want to bug him that much while he was eating lunch with his sister and friends. We hoped that we would see him walking around the store after lunch and be able to get some pics then, but no such luck!

We could both swear to you that if you had asked us the question earlier that day, "If you could pick anyone to randomly run into today, who would it be?"... we both would have answered, "Teenape!".

If you don't mind some seriously graphic, low budgetness, you should definitely check out some stuff from Low Budget Pictures. Of course my recommendation is anything with Teenape in it but everything Chris Seaver puts out is ridiculously funny. I suggest you hurry though, Low Budget Pictures has, unfortunately, closed their doors. I like to think that if their stuff gets popular enough, there will be many more Chris Seaver flicks to grace my movie collection but for now, I'll just have to settle for for the current LBP collection. I suggest you grab it while you can!